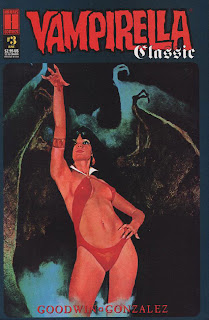 Get ready to Vamp it up as Project: Rooftop, where cartoonists and illustrators bring their costume design skills to task in tribute to the superheroes and villains they’ve grown up with, joins forces with Harris Comics for their newest drawing contest focusing on Vampirella entitled Vampirella ReVamp.

For the first time, Project Rooftop is partnering with the publishing company of Vampirella for an unprecedented contest, open to professionals, amateurs, vampires and aliens: redesigns the vivacious Vampirella.

In addition to the Rooftop's staff roundtable review, there will be three special guest judges for the finalists: Trina Robbins, who created the original Vampirella costume design, Joe Jusko, who's done some of the most memorable art in Vampirella's history, notably his distinctive covers and work in the fully painted book, Blood Lust; and Dan Brereton, the cartoonist & creator of The Nocturnals, who'sworking on a 2008 Vampirella Quarterly Halloween Special.

In addition to these prizes, the finalists selected by the judges will also be up on a fan poll at Vampirella.com for the "Fan Selection" prize of a limited edition Vampirella print.

• To enter, Send in your Vampirella redesigns to projectrooftop@gmail.com, with the subject line: "ReVamp" Include your full name, age, website and mailing address for prize shipment. International winners may be responsible for prize shipment. All the usual P:R Guidelines apply. All entries must be received by Monday, September 8th, 2008.
Posted by John Freeman at 2:17 pm

Email ThisBlogThis!Share to TwitterShare to FacebookShare to Pinterest
Labels: Competitions