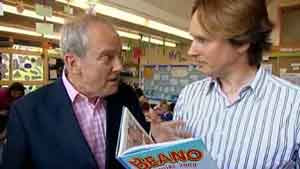 Thanks to iplayer, there's still time to catch an appearance by Beano writer and artist Kev F. Sutherland on the BBC's The One Show, which featured an item on the 70th birthday of the comic on Wednesday.

With a mix of archive footage and interviews, Giles Brandreth charted the history of the comic and its companion paper, The Dandy, and spoke with Kev during one of his many comics masterclasses that he gives all over the country in schools. Later in the episode the very first issue of The Beano - one of about twelve know still to exist -- was shown, with Giles offering a few of the (now politically incorrect) jokes from its pages.

The children in the item had a clear idea of what would sell comics - violence and goo, mainly! - but there was still huge enthusiasm for comics, and a positive take on the medium's future from both kids, Giles and Kev. 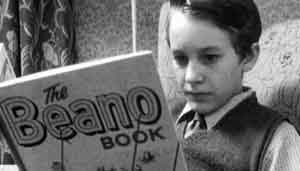 • Watch The One Show (item is about ten minutes in)
• Kev's art in the feature is part of our Beano Birthday Section
• Visit Kev's web site
Posted by John Freeman at 3:06 pm