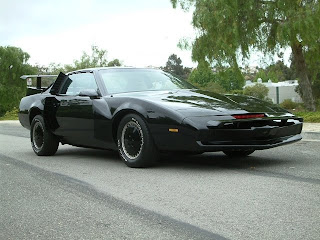 A rare version of KITT, the iconic talking black car from the American 80s TV show Knight Rider has just been sold on the internet auction site eBay.

The KITT model, built from a Pontiac Trans Ams -- and most recently used in the third and fourth series of Knight Rider as well as the TV film and also used in 2006 film The Benchwarmers which starred Rob Schneider -- eventually sold for $53,000.
Picture below the cusyom built car is one of the rare 300-mph "Super Pursuit Mode" T/As with additional aero devices, was described as one of the original vehicles from the series. It was initially used in the third season and then re-converted to simulate the 'Super Pursuit Mode' that debuted in the fourth season.

The car, pictured below, was also used in the 1984 Knight Rider made for television movie and, later, for exhibition and promotional purposes. 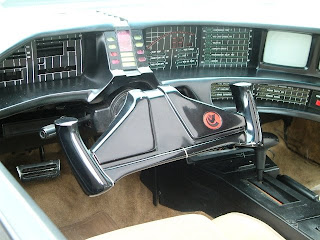 • KITT stands for Knight Industries Three Thousand. There have been a couple of Knight Rider spin-offs

• Knight Rider has recently been revived in the US to huge ratings on its initial airing back in February on NBC. The Hollywood Reporter recently noted Paul Campbell is set to join the ensemble cast fronted by Justin Bruening. Campbell will play the head research tech at Knight Industries. (More news about the new show can also be found on KittSite).

• The pilot for the new show will be released on Region 1 DVD in September.

• The new KITT dropped the Pontiac design in favour of a Shelby GT500KR.