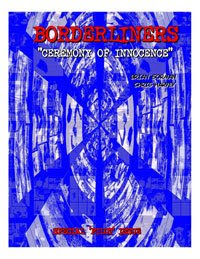 Salford-based writer and artist Brian Gorman is launching a brand new comic book this month, and his work, employing some of the techniques used by Dan Dare creator Frank Hampson and featuring the likeness of Sir Ian McKellen in a starring role, has already attracted praise from leading British comics creators including Liam Sharp and Bryan Talbot.

Borderliners – Ceremony Of Innocence, which is being published by Newcastle Upon Tyne- based Unico Comics, is a one-off ‘pilot’ to introduce a fast-moving 21st century espionage tale with more than a nod to TV drama Spooks and the Jason Bourne film franchise, not to mention the mind-bending sci-fi stories of Philip K Dick (Blade Runner).

The grittily realistic tale of double-crossed government agents fighting to recover their sanity, and hit back against a corrupt department of MI5 was started more than a decade ago.

“Back in Wigan, my hometown, I was visiting my writer friend Chris Harvey when we started chatting about some of our favourite TV shows," Gorman recalls. "We’d always loved The Champions, The New Avengers and The Professionals and we were trying to think of a new twist we could bring to them. We then had the idea of exploring the agents’ home lives. Just what did they do between missions? How did they cope with the stresses of putting their lives on the line all the time? Then it hit us – what if they did have a normal, everyday life but it was all fabricated in order to keep them sane and in line?”

Gorman and Harvey then wrote a 90 minute screenplay, and even attempted to turn it into a comic book back in 1999. However, various other projects took precedence (including several short film projects featuring various well-known faces such as Desmond Llewelyn – ‘Q’ in the James Bond movies).

Gorman completed his degree in Art and English Literature in 1994, then spent over a decade at The Chester Gateway Theatre working in the box office, marketing, poster design, and even appearing on stage in a sell-out production of Bouncers. His first (as yet unpulished) book, a study of the notorious ‘Internet Baby Couple’ Alan and Judith Kilshaw, enabled him to obtain a London literary agent and a deal for a television film. Moving to Salford a year ago suddenly spurred Gorman on towards making Borderliners a reality: 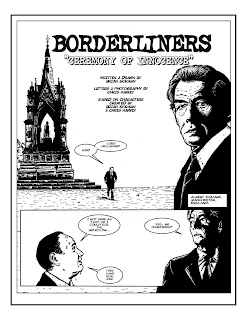 “Coming to Salford was the best move of my life," says Gorman. "There’s a real sense of community here, and so much artistic activity. I tried a stand-up comedy act as my alter-ego ‘Frank Burton (Entertainer)’, and loved the whole experience (whether the audience felt the same way, I’ll probably never know!). I discovered a couple of specialist comics shops which stocked a range of independent titles, and I thought ‘let’s give it a go’”.

Gorman adapted the original screenplay, and the result is Ceremony of Innocence (a nod to one of his favourite poets, W.B. Yeats). Adding a dash of surreal British humour, and a generous helping of all-out action, he’s hoping to attract the attention of the major comics’ publishers.

To add a dose of realism, Gorman uses a technique pioneered by the legendary creator of Dan Dare, Frank Hampson.

“Frank, a one-time Manchester resident, and used his family and friends to pose for photographs as the characters in his comics," Gorman explains. "Then he drew from the photos. I love this technique, as it adds a strong sense of realism, and roots the action in a recognisable world.

"I have several friends who have helped me out for many years, and I even asked Sir Ian McKellen if he could ‘play’ one of the main characters. He sent me a letter agreeing, and wishing me well with the project”.

Things are looking good for Borderliners, with a variety of big-name professionals have given it a resounding thumbs up.

“The effort that's gone into this is clear on every page," feels artist and publisher Liam Sharp, "from the staging, the lighting, rendering and storytelling, to the sparsity of the dialogue - just enough to hint, never enough to tell. It's a joy to read something that doesn't treat the reader like an idiot. No signposts, just intrigue. You have to concentrate. You know that there's going to be a great unfolding of events but you're just getting a tantalising glimpse, not a guided tour.”

"It's an excellent, well executed piece of work," says Wizards Keep creator Tim Perkins, "which I feel and hope will do well."

“Brian’s photo-realistic art is a technique that I can of course readily identify with," adds Strangehaven creator Gary Spencer Millidge, "and the painstaking detail required for the chiaroscuro is rendered with confidence and energy.”

“Borderliners has a confident feel to the structure and dialogue," says Doctor Who artist Mike Collins. "There's a sense you know where you're going and I'm keen to be along for the ride -- Gary Spencer Millidge’s Strangehaven is a good touchstone for Brian's approach here and yes -- I want to know what happens next! And that's more than I can say about most mainstream stuff these days!”

With its beautifully realized British setting and characters, Borderliners does indeed evoke the work of Millidge and the photo realist style of Richard Piers Rayner and others, offering a complex but intriguing plot that is sure to appeal to fans of Gorman's favourite TV shows as well as fans of adventure comics.

• The ‘pilot’ issue is available to order from Unico Comics (www.unicocomics.co.uk)
Posted by John Freeman at 9:18 am