Do You Want To Kiss It Better? 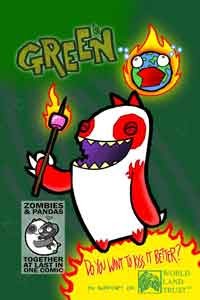 Do You Want To Kiss It Better is a new charity comics anthology aimed at raising money for good causes. The first issue, Green, is on sale now from retailers such as Forbidden Planet Online and London comic shop Orbital Comics (on Charing Cross Road).

The publishers will be donating all profits to the World Land Trust, which funds projects that help to preserve some of the most precious land in the world. (Since its foundation in 1989 the World Land Trust has helped purchase and protect over 350,000 acres of threatened wildlife habitats).

Reflecting the green aim of the title, the anthology was printed on 100% recycled paper with inks based on vegetable oil from a press powered by wind turbines!

"The work in Green was all contributed with the intention of making people think about goes on around them in the world in entertaining and real ways," say the publishers, who have been publicising the title at New York Comic Con. (If you were there, you may have spotted girl who looks quite a bit like Tank Girl selling it).