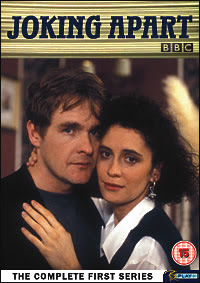 Before the sublime Doctor Who: Blink, before the gory Jekyll, before his two consecutive Hugo awards for new Doctor Who episodes, before even the four seasons of Coupling, Steven Moffat wrote two seasons of a little gem of a sitcom called Joking Apart.

Hidden away on BBC2 it told of the tortured love life of a stand-up comedian and starred Robert Bathurst before he moved on to Cold Feet. The first season of the show was released by Replay DVD several years ago and they have just announced that the second series, plus the original pilot episode, will be released on DVD on 17 March 2008.

Craig Robins of Replay says "It will be a two-disc set this time and the extras include commentaries on all episodes featuring Steven Moffat, Robert Bathurst, Fiona Gillies, Tracie Bennett, Paul Raffield, Andre Ptaszynski (producer), Bob Spiers (director) and Stacey Adair (Production Manager); the 1991 Joking Apart pilot episode (one of a series of pilots that were shown under the umbrella title of 'Comic Asides'); a complete set of scripts in pdf format; 'Joking Apart in the Studio' pdf article; plus a colourful companion booklet."

The DVD is available to pre-order now direct from Replay. You can buy Series 1 from amazon.co.uk
Posted by Jeremy Briggs at 12:34 pm

I may be a fan of Moffat, but you know, this is one excrutiatingly bad sitcom!