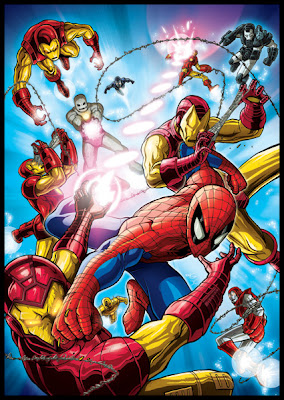 US comics site Newsarama has just posted an interview with Panini's Ed Hammond, editor of Spectacular Spider-Man and reprint editor of Marvel Pocketbooks, interviewing him about their UK range of Marvel reprints.

Spectacular Spider-Man is reprinted in a number of territories including Germany, Spain and France in magazine form and is one of just two Panini titles featuring originated strip (the other being Doctor Who Magazine).

In addition to featuring some stunning upcoming Spider-Man art, Ed talks frankly about the UK comics market, explaining most children's titles are now based on licensed characters, arguing this is due to pressure from the big chain stores that will not risk stocking a kid’s title unless it has an already established presence either as a toy range, TV show or movie - the only exceptions being long standing comics brands in their own right like Beano and Dandy.

"Kid’s titles in the UK have changed to become more interactive, including things like fact files, activity pages, lifestyle features etc, in order to stimulate and satisfy readers," he comments. "The unfortunate side effect from this is that the amount of strip has been cut to only a third or in some cases a quarter of the page count. They’ve really become more like activity magazines than traditional comics."

Panini's argument is that titles have had to "evolve" beyond the comic strip only format. "Whilst a good story with excellent art is important, greater variety is needed to sell comics for kids in the UK market," Ed argues.

What isn't mentioned is that such pages are also far cheaper to produce than a comics page, and when you're in a very competitive market, vying for shelf space against companies such as Titan, Egmont and DC Thomson, you have to watch those costs.

"I know a lot of editors and creators who would love to produce a new fully originated, 100% strip, UK comic containing original characters," Ed says. "Unfortunately, due to the amount of control the big chains have over distribution, it would be a huge challenge to get it into enough shops to make a profit."

No argument there - launching an originated comic today in the UK woudl depend on a lot of retailer goodwill and those big chains like Tesco and ASDA are not in it for goodwill. But despite this, Ed's also right to point out how bouyant the UK comics scene is in terms of the number of comic titles, even though most are licensed and most feature just reprint strip.

"There are an awful lot of titles out there," he says, "which is making for some healthy competition amongst publishers. "

• You can read the full interview here.
Posted by John Freeman at 4:22 pm