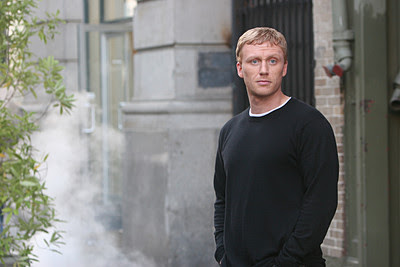 Broadcast reported 12 December that the US network had until 11 December to give a full-season pickup to time-travel drama but has allowed the option to lapse, which means it has all but cancelled the 20th Century Fox-produced series.

This terrific show, which centres on a man who unexpectedly finds he can time travel but has no control over when or where he goes (but it is generally to help people, drawing comparions with Quantum Leap and, perhaps, Early Edition). If you aren't watching, give it a try -- it's really good!

Produced by Kevin Falls (also producer and writer on legal drama Shark and the The West Wing, interview here on Premium Hollywood), the show stars Kevin McKidd as the time travelling reporter Dan Wasser and Gretchen Egolf as beleagured wife Katie, coping not only with Dan's disappearances but an eight year old son who thinks his father can do magic and the knowledge that one of Dan's fellow timespirits is his believed-dead fiance.

Sadly, ratings have not been strong in the States and NBC has opted not to pick up the series for any additional episodes, although a fan campaign is underway to try to convince NBC otherwise. (It looks as though NBC may also have cancelled Bionic Woman starring former Eastenders' actress Michelle Ryan). Over 1500 people have signed a campaign petition and one campaign group also tried to boost the show's chances by organising a mass buy of the episode Blowback via iTunes in the US.

"All indications are that NBC doesn’t want to cancel this show," say campaign organiser. "They love it. They just can’t justify keeping it on the schedule."

They're urging people to send letters in support of the show to NBC's president and chief executive officer Jeff Zucker c/o NBC, Re: Journeyman, 30 Rockefeller Plaza, New York, NY 10112 USA - and even send him Rice-a-Roni, the San Francisco treat, which you can buy by the case from Amazon

and attach a short message using their sending options. (The length will limit your creativity, however).

"Orders trickling in over several days or weeks at 30 Rock might be even more effective - it’ll keep reminding Jeff Zucker that Ben Silverman, co-chairman of NBC Entertainment and NBC Universal Television Studio, has an order to place.

• Details on the fan campaign can be found at http://savejourneyman.net

Postscript, August 2008 (with thanks to Ian Cullen): Journeyman was not saved as we all now know, but in August 2008 AintItCool News published an interview with the series creator Kevin Falls about what would have happened on the show if it had continued: read the interview here
Posted by John Freeman at 1:02 pm

If I can get enough people to sign a petition to stop the cancellation of this show could there be a possible way for the show to continue?!!! I started up a Hotmail account. I will forward all of them at once so, nbc will see what a mistake they are doing!! I agree with most of the comments people have made, how they are tired of all the reality shows and right when a good show comes on it gets canceled! Its not fare! This is literally the one show i love even better than HEROES. Which is amazing considering at first that was my favorite show, but realized i started to become a lot more excited for journeyman to come on!!So, whom ever is a believer of this show needs to do something about this. Help me do this!! THE ACCOUNT TO VOICE YOUR OPINION IS,"journeypet@live.com"
Sincerely, Sara H.

You're probably best off supporting the campaign I've linked to above -- they seem to know what they're doing. But any letters of support for the show to NBC may help.

I can’t believe this shit! I love this show. For once something worth watching that brought quality, love, drama, suspense, and action. I watched the last episode tonight and was floored to know it was the last one.
I hope NBC reconsiders or another network like Sci-Fi will pick it up. People would rather watch reality garbage, voting on who can sing, or watch a bunch of fat ass people try to lose the most weight in 6 months. No wonder this country is so brain dead.

This was truely a good entertaining show. I find it hard to believe this show lost out to a reality show. It is a shame that people have to turn to a TV show to watch others reality. I have enough reality in my life and enjoy the break this show provided. Oh Well it must be me...

Journeyman quickley became my favorite show, along with Dirty Sexy Money. Cancelling a show like this, this soon after it came out was SOoooo stupid. I hate NBC. Dave Letterman is not funny anymore. SNL is the worst thing on TV. You ruined CHandler and Josh Limon on Studio 50 sunset strippers. You've fallen behind the times with all your cheeze NBC. Check out 24 on FOX, It's on like it's 6th day. thats 6 seasons, of 24 episodes each. that's like 300 episodes. Tell me I don't live to see what Jack get's himself out of next. I've been following him for 6 $%^$ing days. You finally get a strong male lead in Kevin Mckidd and you CANCEL HIS SHOW? That's like cancelling Tom Sellick after the first 12 episode of Magnum, or Bill Shatner after the first 3 seasons of Star Trek, or Don Johnson after.... you get what Im saying. I read somewhere that people were gonna send you Rice a Roni. Well I got a better idea. Everyone who reads this pass it on 1:11 am the moring of Januay 11. That's right 1:11 1/11, we all log in to NBC.com and have a JOURNEYMAN VIEWING MARATHON. and everyone log in to NBC and start up they're favorite episod of Jounreyman. I know I will!!!!!!!!!!!!

Where have I been? i watch this show every week and didn't know Wed. was the finale. I'm dumbstruck by it. Boo to NBC!

I say hurt them where it counts....in there wallets. If everybody went out and sold their stocks in the company I bet they would seriously re-think thier decision.

FYI a petition is often considered something like a single letter.

In terms of getting a response 10 or twenty letters would make more of an impression than a petition with 100 names on it. Varring the zip codes and font might help also (-: .

Why cancel it before knowing anything about how he travels? I hate this. I fought hard. Over a million people to save "John Doe" on another station, but noooo, they have to do it to a show the same way. If no ending, give us a freakn' movie like "Serenity" got!

Like Invasion and Carnivale before that, another show I've grown attached to is axed before the complete storyline is allowed to be told. I'm so tired of networks caving to low ratings so quickly, with some shows like 3 lbs being canceled after only 2 or 3 episodes being aired.
I'll sign the petition, but stories like Jericho are a rare exception, so I'll keep my hopes in check. - Japhy

Wow, can't believe Journeyman is cancelled. Such a great program with a fantastic actor, Kevin McKidd. Whoever is to blame for this, suck on him or them. There are other programs on NBC that should be cancelled not this fantastic time travel one that got me watching tv again.
Perhaps we should all stop watching NBC programs and see how long these vip guys keep their jobs.
We are not helpless. We can do something about this if we all stick together. Don't watch NBC until they put Journeyman back.

Hey Sara,
I love this Journey Man. For once something worth watching that brought quality, love, drama, suspense, and action. I watched the last episode tonight and was floored to know it was the last one.