New Dennis the Menace animation in the works

Beano character Dennis the Menace is being updated in a new animated version for CBBC.

The cartoon, revolving around Beano star Dennis and dog Gnasher, will have a modern look and contemporary storylines aimed at five to 10 year-olds.

The series is currently in pre-production and will aim to retain Dennis's classic streak of schoolboy naughtiness and charm.

"The BBC said it was really interested in a new series but wanted the format to be more compact and exciting," Benjamin Gray, DC Thomson's executive manager, revealed, referring we assume to shows such as the 1996 Dennis and Gnasher animated series, which ran to 25 minutes per episode. "We feel we have got that with this new series."

Wendy, the comic strip charting the adventures of a teenage girl and her horse, based on DC Thomson's shared property (with Egmont) created in English but published in Germany, is to be made into a 26 x 26-minute animation series, aimed at pre-teen girls. This could potentially mean the title may finally see UK publication, with DC Thomson already publishing Bratz Magazine for girls. 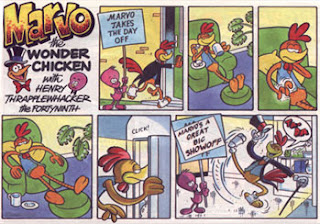 Another animated show, Marvo the Wonder Chicken ("The world's most accident-prone daredevil"), based on the Dandy strip of the same name, is also on offer at Mipcom, described a 52 x 2-minute comedy shorts series in the tradition of Looney Tunes and Tex Avery.