Dracula - back from the dead! 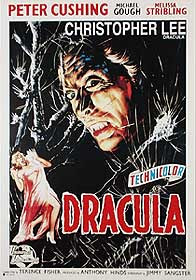 This Hallowe'en, a stunning new restoration of Hammer's classic Dracula will thrill audiences at over 70 cinemas across the UK thanks to the British Film Institute.

The Hammer studio's most celebrated film, Dracula stars Christopher Lee in his first ever outing as the vampire Count. This was also the first version of Bram Stoker's famous novel to be filmed in colour, lending greater emphasis than ever before to the physical aspects of horror.

"Of all Draculas," says horror aficionado Kevin Jackson, "Christopher Lee is the most truly frightening." But he is also suave, debonair and an accomplished seducer who awakens his female prey's desire before they offer themselves as victims.