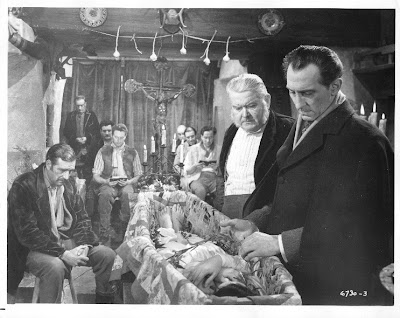 15 October 2007 sees the long awaited UK release of The Brides of Dracula and The Evil of Frankenstein on DVD, courtesy of Showbox Entertainment.

The Brides of Dracula is Peter Cushing's second outing as Van Helsing and David Peel's only vampire role. Described as one of the most beautifully photographed movies ever, even if the effects are dated (crappy bat alert!), but the film's redeeemed by great performances from Cushing and Peel plus sterling work from vetrans Freda Jackson and Martita Hunt

Cushing's authoratative Van Helsing carries the movie and David Peel's Baron Meinster, who is causing havoc in a girl's school, is an excellent vampire foe.

Cushing also features in The Evil of Frankenstein, as Baron Frankenstein who, not content with once creating one monstrous creature, returns to his ancestral home in Karlstaad, determined to continue his experiments into the creation of life. This isn't the best of the Frankenstein films, but Cushing is always good value in my book.
Posted by John Freeman at 10:02 am