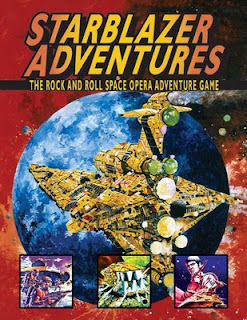 Each of Starblazer’s 281 issues explored a whole adventure set within the vast galactic empires of the far future, giving the forthcoming roleplaying game from Cubicle 7 Entertainment a wide variety of settings to explore. From low-fi space exploration to galaxy-busting wars to space fantasy epics at the end of time, there is plenty for everyone.

The Starblazer licence was picked up by British games publisher Cubicle 7 Entertainment, who also publish SLA Industries and Victoriana. Utilising the critically acclaimed FATE rules system, the core release will include three detailed settings based on the very best stories from Starblazer and will also detail recurring characters, organisations, empires and aliens such as the Fi-Sci (the Fighting Scientists of Galac Squad), The Star Patrol, The Suicide Squad, The Planet Tamer, Cinnibar the barbarian warrior of Babalon and galactic cop Frank Carter to name just a few.

• Click here for a complete Starblazer checklist on downthetubes)