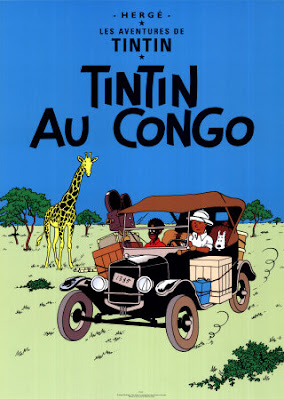 I don't understand why there's all this sudden fuss about Tin Tin in the Congo from the Commission for Racial Equality. I'm all for racial equality, but it's not as if this book has just gone on sale, and it's usually been published with warnings about its content, so why all the fuss now?

I do agree with Borders decision to move it out of its children's section (where it should not have been placed in the first place, as reported by the BBC and other media today) but has some bigwig at the CRE (described by

Reuters reports the Hergé foundation has hit back at the CRE's complaint , saying the 1931 story-- one of 23 books which track the adventures of the fictional young journalist and his trusty dog Snowy -- should be read in the context of the period when it was published.

"The context is outdated ... what's left are the jokes," Marcel Wilmet, a spokesman for the Hergé foundation said in reply to a recommendation from Britain's Commission for Racial Equality (CRE) that the book be removed from bookshops. It's also well known to those that really know about comics (clearly, no-one at the CRE!) that Herge later distanced himself from the sentiments of the story. "I portrayed these Africans according to … this purely paternalistic spirit of the time," he is reported as commenting. It's one of the reasons its took so long for a collection to be published in English in the first place.

This is a silly campaign and the CRE has better things it could be campaigning on, in my opinon. Slapping the Evening Standard for spreading the fiction that Ken Livingstone has given huge amounts of money to build a mosque in London's East End for example, a story that is completely erroneous (Livingstone issued a little-reported denial way back in April) but has inspired someone to petition the government to stop it which has been doing the e-mail rounds for weeks.

Addendum: for more on the 'mega mosque' myth, see this blog item by Doris Marsh, which offers a couple of media sources for the story.

Thank you for the Livingstone/Mosque link - I had been looking for something like that. Shows how under-reported it had been, I couldn't even find it on the Mayor's site!

As for the sensational Tin Tin .... very interesting argument you have given here. Back in the 80s I studied children's books and the sexism and stereotyping in them. Such books absolutely have to be out of circulation to children but don't see the harm for adults as a humourous interlude to the ludicrous ways people have behaved. Unfortunately it seems we learn few lessons and such outrageous racism and stereotyping continues on apace.

My feeling is, we can't learn from past mistakes if we don't know about them. If you airbrush literature such as Tin Tin, Tarzan etc from public view, we face the possibility of horrendous repetition of past stereotyping.