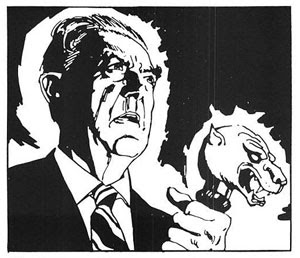 Notching up a staggering 1,225 episodes, Dark Shadows is something of a cult classic amnong its many fans, who include Johnny Depp. The soap, which aired weekdays on ABC in the US from 1966 to 1971 featured vampires, monsters, witches, werewolves, ghosts and zombies and is celebrated at regular Dark Shadows Festivals. Two feature films were produced in the 1970s -- House of Dark Shadows, heavily adapted from the TV series plot lines, and Night of Dark Shadows - and was revived, albet briefly, in the 1990s by NBC.

A new Dark Shadows pilot was produced for in 2004, but was not picked up for broadcast.

Gold Key (and, in the 1990s, Innovation) published comic books based on the series and a newspaper strip - see panel above - drawn by New York-based artist Kenneth Bruce Bald (under the pseudonym "K. Bruce") was published between 1971 and 1972, which appeared in US titles such as the Los Angeles Times and The New York Daily News. there have also been several Dark Shadows books, including Barnabas & Company: The Cast of the TV Classic Dark Shadows and The Dark Shadows Collectibles Book by Craig Hamrick the latter only available from the Pomegranate Press website (and at Dark Shadows Festivals)

As a child, Depp revealed in an interview for website Combustible Celluloid in 1999, the vampire patriarch Barnabas Collins, played by Jonathan Frid was a huge obsession. "I loved Barnabas Collins more than I loved the Harlem Globetrotters," he explained. "I wanted to be Barnabas Collins so much that I found a ring, it was probably one of my mother's rings, and I wore it on this finger, and I tried to comb my hair like Barnabas Collins, and I was trying to figure out how I could get fangs. It really had a heavy impact on me, a heavy influence on me."

Infinitum-Nihil recently secured a rights deal to the show with the estate of Dan Curtis, the producer/director who created the soap. Depp and King will produce the film with David Kennedy, who ran Dan Curtis Productions. until Curtis died in 2006.

There is a cool new low-budget, independent TV series being produced in Dallas that is a parody of Dark Shadows. It's called Misty Dawn. It's like Dark Shadows with some Dallas (the primetime soap) thrown in. They have a website up where you can watch the trailer and the first 2 episodes. It's at www.mistydawntexas.com. It's pretty funny in an SCTV kind of way.