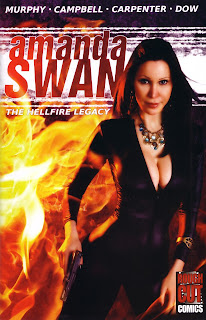 Glasgow based Rough Cut Comics published the impressive vampiric graphic novels Rose Black and Rose Black: Demon Seed and, as part of the publicity for Rose Black, the company used British model Amanda Swan to portray the character of Rose. It was then that they realised that there was the possibility of basing a comic around the model herself and Amanda Swan: The Hellfire Legacy re-imagines her as a reality show It girl, at least by day.

The shadowy Anglo-Paralax Corporation manipulates the British media for their own ends, controlling soap stars, pop idols and reality show contestants for their corporate aims - except for one. Amanda Swan eludes them. Like the rest of the country they know she attends premieres, gets her photo taken, takes her exercise and likes her dogs. They don't realise that by night she is a leather-clad motorbike riding vigilante with a deep seated contempt for their organisation. 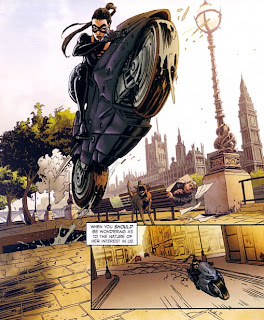 Amanda Swan? Don't worry I had never heard of her either, yet that is irrelevant as writers Ed Murphy and Tom Campbell weave a fictional version of Amanda into a story that comes across as Lara Croft meets Cinebook's The Green Manor. Basing the modern day part of the story on the modern media obsession with reality 'stars' while also jumping back to the Victorian Hellfire Club, the story acts as an interesting taster to the character and the modern day situation that she apparently chooses to put herself in.

Perhaps it is the Green Manor-style Victorian setting but, despite the US publishing format, the feel of the tale is much more European bandes dessinee than US superheroics and that is a very good thing in my book. Both Rose Black books have a lot of fairly extreme violence in them and while the amount of violence in Hellfire Legacy is much less, when it does appear it is more akin to a zombie comic's burying an axe in a skull than a superhero comic's punching someone through a wall.

Joel Carpenter's artwork was impressive in Rose Black: Demon Seed and remains so here as he covers both modern day and Victoriana. The modern day settings are portrayed in clear, clean lines while Derek Dow's colours give the Victorian sections a richer, more painterly style. Inevitably many panels dwell on the character's physical attributes, based as she is on real glamour model, but on the whole it is done in a 'good girl' style and it doesn't cross into Page 3 territory. Dramatic license is used somewhat with throwing daggers appearing from places about her person that, in reality, it would be rather unsafe to store them, but I can certainly forgive them that conceit.

Amanda Swan: The Hellfire Legacy maintains Rough Cut Comics run of high quality professional products brought together in a very slick package with a photo cover, a gallery of full page colour photos of the real Amanda at the back and the promise of another title, The Evil That Men Do, to come.

There are more details of Amanda Swan : The Hellfire Legacy on the Rough Cut Comics Facebook page and blog and the title can be bought directly from Amanda Swan's official website shop.

There is an interview with the real Amanda Swan about her fictional alter-ego on the Rough Cut Comics blog.

Amanda Swan and the Rough Cut Comics team will be selling and signing comics of The Hellfire Legacy at the Kapow! comic convention in London's Business Design Centre on 19 and 20 May 2012.
Posted by Jeremy Briggs at 7:00 am